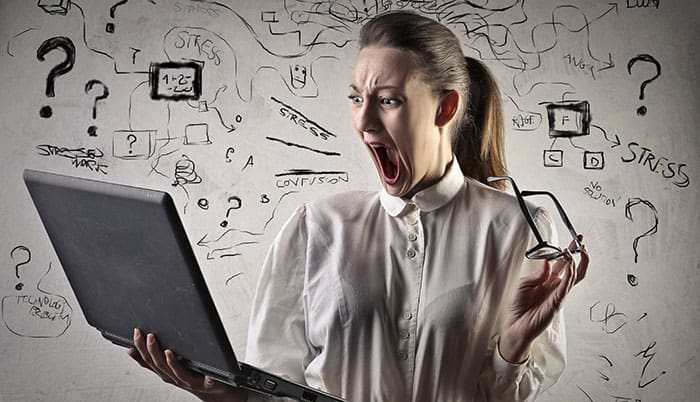 Except for the fortunate few, all of us need an income. We have bills to pay and mouths to feed, and cash needs to be flowing. Many of us also want to find fulfillment in our jobs; dream careers and high ambitions are things many women hold, but sometimes finding that perfect position takes time. These two things mean that you may find yourself willing to take any job you can get in your own field.

Our advice: don’t. When things get dire—or seem that way—remember that you still deserve to wake up each day content to go to work. There are a lot of so-so jobs that you can take, but some positions will end up making you feel awful. When you spot these listings, keeping looking.

If, however, you already are in a job that makes you feel despondent, these are some things to keep in mind while you decide what to do.

Whether you took a job out of desperation or a misguided belief that it was a good fit, you might one day find yourself in a position that isn’t right for you.

Amy accepted a job that she knew she wouldn’t like. Why? She had been looking for a position in her field of the entertainment business for three years. She had so far been unsuccessful, and she was desperate. The company was a big name in her industry! But… the position itself was collecting money from people who did not want to pay.

However, at the end of the very first week, Amy found herself in the emergency room. She was fatigued, nauseous, light-headed, and had a headache that could make a Navy SEAL cry. It turns out that it was a migraine—the first in her life—but it knocked her off her feet for days. Amy’s headaches continued, but she powered through the first few months. She dreaded going to work each day as her hours were long, and she had to travel constantly.

Eventually, Amy found that she was always grumpy, short-tempered, and perpetually tired. She felt like her husband and cat didn’t like her anymore, and she didn’t like herself, either. After five months on the job, Amy realized that she had to quit—for her own sake.

When the stress for your job starts damaging your physical and/or mental health, that’s a flashing neon sign telling you that the position isn’t good for you. If you find yourself dreading going to work each day, it’s time to find a new position. Your job should not cause you to stop liking yourself. If it does, leave it behind.

After Amy left her job, she immediately started to feel better. However, even months after she resigned, she still had to remind herself that the fact the she left her job was not a fault of her own. Cerebrally, Amy knew that by leaving the position, she did herself and the company a favor. It wasn’t a good fit, and her resignation allowed both parties to move forward to options that better suited their needs and aims.

But Amy still got the feeling that the fact that she resigned was some sort of failing on her part. If only she’d been stronger, just stuck it out, or developed the right personality to deal with people who didn’t want to see her. Maybe then she’d have been able to stick with the job, get that promotion, and make her career at that company.

This kind of thinking is wrong, so, if you experience it, remind yourself that you did the right thing. If a job is toxic for you like Amy’s was for her, then no amount of work is going to make it bearable. You won’t ever be able to do high quality work when you’re miserable.

Second-guessing yourself is natural, but you have to resist it. Of course, leaving a job is a decision to make carefully, but, once you’ve made it, looking back does no good. The only thing to do is trust that you made the right choice—because you did—and plan your next move.

While leaving her job was best for her mental and physical health, Amy is now leveraging this experience to be better prepared. She is focusing on her skills and building a work portfolio. Amy researches and writes articles directly related to her industry, building qualifications for positions in her field that are actually enjoyable.

Something that Amy has learned through her experience is to not take an awful position. Even if you’re desperate for a job in your field. Find employment in the interim that is, perhaps, a “meh” job. At least it won’t make you miserable and will allow you time to work on getting your dream career.

Do what Amy did, and hone skills that are relevant to the job you want. Find or create opportunities to produce work that you can showcase to potential employers. Take the time to enjoy the things and people you love. Enjoy your freedom and take a deep breath, knowing and appreciating that you never have to go back to your old job again.

The most important thing to learn is to never take a position that you’re sure will make you miserable. Obviously, most of us need an income to keep our heads above water. But you should avoid jobs that you think will cause you undue anxiety. You know what your strengths are, so look for a position that will play into them. No one deserves to feel wretched at work.

How to Deliver Constructive Criticism to Difficult Employees
In the Zone: Coordinating Communication Around the World
How to Think Like a Client to Maximize Sales Success
How to Bounce Back From Disappointments and Thrive