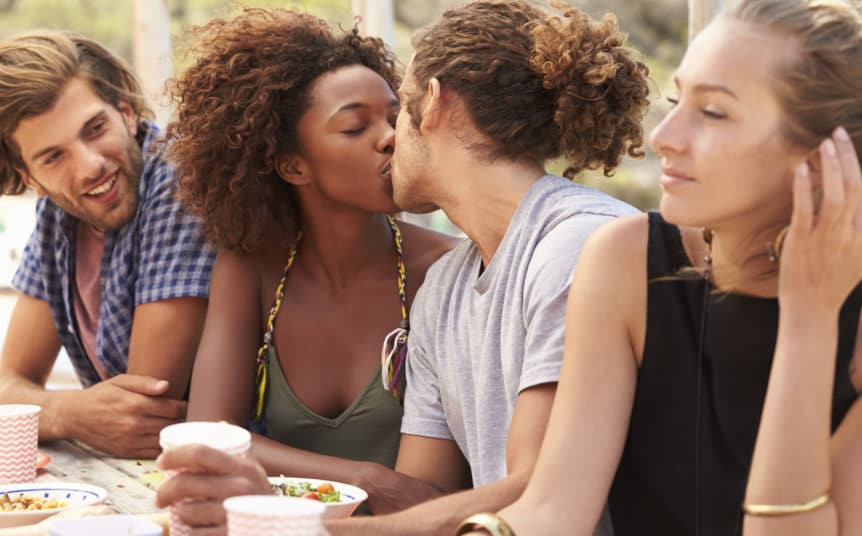 What do you do when someone you care deeply about is in a relationship with someone who’s just… terrible? We all know the trope of an evil step-mother, and many of us have suffered after our parents’ divorce and their subsequent relationships with lame creeps. Most of us have had friends with awful boyfriends or girlfriends. You may even have a brother- or sister-in-law you can’t stand. Horrible partners can come in all shapes and sizes, and depending on the severity of the issue, they can strain your relationship with your friend or relative. How do you get around this issue? How do you show she deserves better?

The Spectrum of Terrible

The first step in addressing the problem is gauging how bad it actually is. The bad boyfriend in question might be mildly unpleasant, you might not know him well enough, or maybe the two of you just have incompatible personalities. If that’s the case, it’s best if you just let it be. If your friend is happy, don’t ruin it for her just because you think he’s not attractive or successful enough.

However, maybe the new partner is truly bad. Does he do or say offensive things? If he’s racist, sexist, or homophobic, that can be a huge problem. Is he genuinely mean? Do you get the impression that he’s verbally, emotionally, or physically abusive? If he’s abusive towards pets, that’s a major red flag and an indication that he could turn his abuse towards human victims – like his girlfriend. Does he take advantage of your friend, whether financially or otherwise? Does he put her into dangerous situations? Pay attention to signs that he’s worse than just your average lame date.

Try to be objective in your judgment, and make sure you’re not jumping to conclusions or over-emphasizing bad first impressions. Don’t make a problem about a guy just not being a perfect fit, but don’t ignore bigger issues, either. If you’re the only friend or family member who has an issue with the guy, either you noticed something they didn’t, or he may not actually be as bad as you think. You may just need to get to know him better. But if the majority of you are in agreement that he’s truly terrible, you’re probably right. Find out what others think and trust your instincts.

Your Role in Their Relationship

How you go about addressing the issue can be tricky. It depends on how close you are to this friend or family member, but it also depends on how bad the boyfriend actually is. If he’s really not that bad, don’t bring it up unless she directly asks for your honest opinion. It’s not your business if your sister wants to go out with someone you deem under-qualified. Only mention it if she wants to know your thoughts on the matter. However, if you have legitimate concerns about her mental, physical, or other well-being, you have to figure out how to delicately broach the subject with her. You should consider working with a counselor or pastor for extra guidance.

Pick a safe space for you to have this conversation. It should be somewhere relatively private; you don’t want nosy eavesdroppers listening for gossip. Choose a place where your friend will feel comfortable. When you bring up your concerns, do so gently. Don’t come across as harshly judging your friend or attacking the boyfriend. This will only make her defensive. Instead, ask questions and emphasize your concern for her. The conversation should be about your friend, how she feels about the relationship, and how her situation can be improved. Be prepared to help her, but don’t push if she doesn’t want it.

If you’re close with her – maybe it’s your sister, mom, or best friend – you’ll likely have a strong enough relationship to have these tough conversations. On the other hand, if you’re not super close to this person – maybe she’s a cousin you don’t see that often – it can be trickier. You may talk to someone else who’s closer to her about discussing it. If you’re not comfortable talking to someone else about it or don’t have another person to turn to, you should share your concerns carefully.

You need to know upfront that your friend might not appreciate your intervention. She may politely disagree or change the subject. Or, worse, she might become upset and defensive. If she is truly angry, this may harm your relationship with her. It could lead to a big fight that leads to you two not being on speaking terms for a while. Worst case scenario, it might ruin your relationship. Unfortunately, difficult conversations about a person someone is close to can be disastrous. The best you can do is be sensitive during that initial conversation and ready to rekindle your friendship should damage be done.

Once you’ve said your piece, it’s up to your friend to decide what to do about it. You can’t and shouldn’t try to force her to heed your advice. Share your observations, but then let her determine the next steps at her own pace. All you can do at this point is be there for her if she does change her mind. Be prepared to support her when she’s ready.

If your friend does accept that her romantic partnership is problematic, be there for her as she moves forward. She may need a shoulder to cry on or someone to talk to, so be ready to listen. If she was living with the guy, you may let her stay with you until she gets back on her feet again. Eat chocolate, watch her favorite movies – do what you can to lift her spirits.

Seeing a friend in a bad relationship – especially with someone who is cruel or simply doesn’t value the other person – is difficult. Talking to your friend about it won’t be easy, but if you do choose to do so, be gentle and supportive of your friend, regardless of her decision. All you can do is tell her and show she deserves better, but accept whatever action she chooses to take. Be the best friend you can be for her, and hope that she’ll see her own worth as much as you do.

Note: This article was written about a hypothetical female friend dating a bad boyfriend, but the advice applies regardless of their genders or the seriousness of their relationship.

What is Emotional Eating and How Can You Overcome It?
14 Lifesaving Apps to Keep You on Track
How to Make the Big Move to Live Alone for the First Time
Ladies! This is How We Can Be Kinder to Each Other